Automations are nothing but well-defined processes designed to reach a goal. While often it is not technically difficult to implement processes with Django projects, maintenance can become quite complex over time if

Events can start an automation or can change its course once it is running. Django automations can be started by Django signals (see Django documentation), programmatically by instantiating an automation, or by sending it a message.

Tasks describe work that has to be done, either by the Django application or by an user: Send an email or update a model instance are respective examples.

Tasks are the single units of work that is not or cannot be broken down to a further level. It is referred to as an atomic activity. A task is the lowest level activity illustrated on a process diagram. A set of tasks may represent a high-level procedure. Tasks are are atomic transactions from a Django viewpoint.

Work to be done by a user are represented by Django forms where the user has to fill in the results of her work, e.g., do an approval, fill in billing details etc.

Gateways change the flow of an automation, e.g., depending on a condition. Django automations offers If(), .Then(), .Else() constructs. The Split()/Join() gateway allows to parallelize the automation.

Assume you have a Django app that collects issues on a list and each week it creates an issue list for discussion. 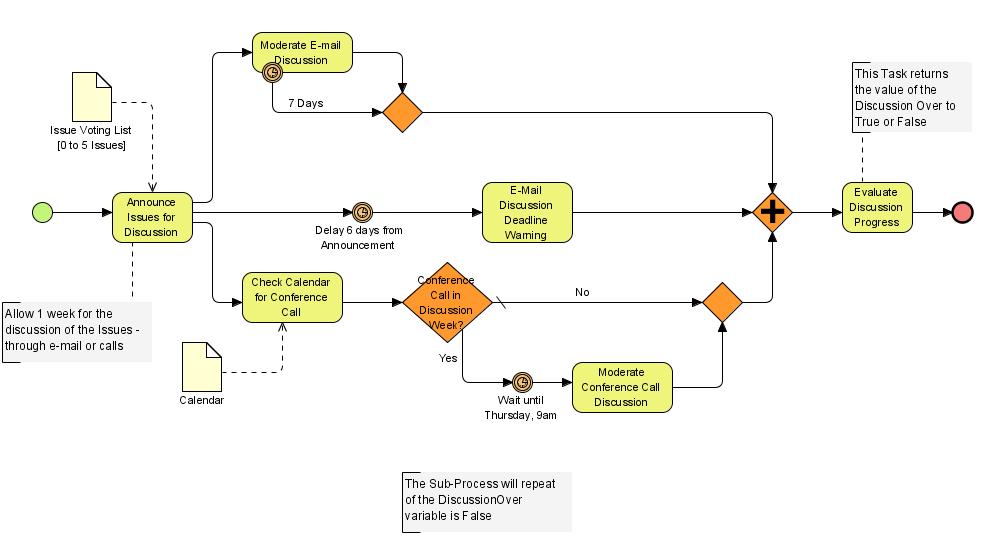 Django Automations allows to describe and document the process in one place, a python class (what else?).

This process can be translated into an automation like this

Automations have a state, i.e. they execute at one or more tasks. All execution points share the same attached model instances and (simple) state data. As many instances of an automation may be executed concurrently as necessary each instance has its own state.

Let’s say you wanted to automate the signup process for a webinar. Then a single session of a webinar with date and time might be the model instance you wanted to attach to the automation. This means each session of the webinar would also have an independent automation instance managing the signup process including sending out the webinar link, reminding people when the webinar starts or offering a recording after the webinar. While during the process the session does not change the list of people who have signed up changes but still always refers to the same webinar session.

Django automations has two optional ways of storing state data. The first one is binding model instances to an automation instance allowing for all form of data Django models can handle. Additionally each automation instance has a json-serializable dictionary attached called data. Since it is stored in a Django JSONField it only may contain combination of basic types (like int, real, list, dict, None). This data dictionary is also used to store results of form interactions or for automation methods to keep intermediate states to communicate with each other.

When interacting with humans, an automation will have to wait for input but also give humans time to digest and react. Modifiers control the speed at which an automation is executed: How long to wait before sending a reminder, or how long to give time before escalating the need for important information to the user’s superior. The timing of each step is controlled by “modifiers” which, e.g., pause an automation before continuing.

Practically all automations pause or wait for other processes to finish most of the time.

From time to time, the automations have to be checked if they can advance. This is the task of a scheduler outside this package. The scheduler may, e.g., call the class method models.AutomationModel.run. Additionally, Django Automations offers a new management command python manage.py automation_step that can be invoked by an external scheduler.

Also, an automation may advance, e.g., after an processing form has been filled and validated. Then the automation may advance within the request-response cycle of the POST request of the form. To keep the web app responsive, all automation steps need to be fast. Optionally, Django Automations allows to spawn threads for the background processes, or if serious calculations have to be done, outsourced to a worker task.

Currently, there is no native integration with, say, Celery. However, this might be an extension which would be welcomed.